I have always loved history. I was fortunate enough to be inspired by a very good history teacher at school and perhaps that is where the spark of interest began. In many ways I am struck by how the history of early Christianity is being mirrored in our own technologically driven world today.

Take Gnosticism for example. Perhaps the best way to describe Gnosticism would be as a ‘religious philosophy’ that could integrate into various religious traditions and did so in Christianity in the first centuries of its existence. The essential tenets of Gnosticism could be summed up briefly as follows; the material world is under the control of evil. A ‘divine spark’ is trapped within human beings and that alone is capable of being rescued. This rescuing, or salvation, comes through a secret knowledge, ‘gnosis’, which is part information but also part experiential. ‘Gnosis’ is not only truth propositions but also self-knowledge.

In the ancient world Gnosticism was so pervasive that it led to the early Christian bishops drawing up our present canon of scripture in the Bible, excluding texts for example, from the more recently discovered Nag-Hammadi library, such as the Gospel of Thomas. They also formulated the Christian creeds, such as the Nicaean Creed, which are repeated every week in churches around the world to this day. It is hard to generalise but Christian Gnosticism led to certain moral abuses and had more in common with pagan mystery religions than the historical Jesus. For these and other reasons the response of the early Christians to Gnosticism was reasoned information, which it can be argued, still pervades traditional Christian liturgical worship and theology.

But we have a problem. The human experience of God requires more than reason. This is not to downplay reason, indeed within Anglican theology it is said to form part of a ‘three legged stool’ which consists of ‘Scripture – Tradition – Reason’, classically defined by the 16th century English theologian Richard Hooker.  Later the Age of Reason was an eighteenth-century movement which was a reaction to the mystical religion of the Middle Ages and affirmed the scientific disciplines of the Enlightenment. But those who study history will know that historical trends often go back and forth like a pendulum. The Age of Reason and the Enlightenment provided many great things and personal liberties but faith is more than a set of rational propositions about God.

In part I believe we can frame these historic movements as ‘successors’ of the early Christians to define Christianity into a set of propositions that could be contained within an institutional faith that could sit easily with the governance framework of the Roman Empire under the Emperor Constantine and his successors. But reasoned argument about God cannot satisfy the human thirst and experience for the numinous of God. Putting it simply, creeds and the formal liturgies they are placed within cannot guarantee a spiritual encounter of the divine, they can only define what is believed, or more negatively, who is ‘in’ and who is ‘out’. But this is nothing more than ‘club membership’ and fails to meet the needs of the majority, something that cannot be ignored in this country as the inherited ‘Christendom’ model of Christianity continues to unravel and decline.

New statistics confirm the continuing spiral of decline of church attendance or even acknowledgement of membership to the traditional Christian denominations of the United Kingdom. People are voting with their feet and do not want to be considered as even nominally ‘in’. This is a sea change. Or perhaps it can be said that Gnosticism never really went away? It’s attraction remains within the Christian Church even though those who may profess something of it in their understanding of God may never have heard of the word. The debate will continue and not only within theological circles about the human desire for ‘experiential’ knowledge. For example, in a recent article ‘The Information Age is over; welcome to the Experience Age’, commenting on the changing use of social media, Mike Wadhera has written:

“Facebook is an Information Age native. Along with other social networks of its generation, Facebook was built on a principle of the desktop era —  accumulation. Accumulation manifests in a digital profile where my identity is the sum of all the information I’ve saved —  text, photos, videos, web pages….. In the Information Age we represented ourselves with this digital profile. But mobile has changed how we view digital identity. With a connected camera televising our life in-the-moment, accumulated information takes a back seat to continual self-expression. The “virtual self” is becoming less evident. I may be the result of everything I’ve done, but I’m not the accumulation of it. Snapchat is native to this new reality. Many people think Snapchat is all about secrecy, but the real innovation of Snapchat’s ephemeral messages isn’t that they self-destruct. It’s that they force us to break the accumulation habit we brought over from desktop computing. The result is that the profile is no longer the centre of the social universe. In the Experience Age you are not a profile. You are simply you.”

Wadhera argues that we are moving from an Age of Information to an Age of Experience, I would dare to take this further and say an Age of ‘Global-Gnosis’. This is a time of mass information as never before but the irony is that something more is craved, and that ‘something’ is experiential knowledge. I believe we can see this in many ways, from the changing trends in holidays to cater for ‘extreme or adventurous’ experiences to the growth in popularity of meditation practices such as mindfulness, which seek to place us directly in the present moment or the ‘now’.

In 21st century Britain the continuing rejection by the general population, not only via church attendance but membership of traditional Christianity, underlines that people do not want church liturgies to inform them about God but to provide them with an experience of God. And it is more complex than merely suggesting that Charismatic or Catholic liturgical practices fulfil this experiential need. Information, which may include modern translations in worship, are not enough. The human soul in the 21st century still hungers for the numinous that liturgies coming from the era of rationalism cannot seem to fulfil as people continue to vote with their feet and walk away.

A new apologetics is required. One comfortable in the digital age of ‘Global-Gnosis’. Traditional orthodox engagement may not be enough to meet this new millennium of creativity and dialogue that is typified in the memes of social media. As the gulf widens between the Christian Church and the social-milieu within which church communities find themselves, there is a growing need for boldness in creativity and inculturation of the Christian Gospel as there once was in the early centuries of the Church and its missionary movements, such as Celtic Christianity within these isles.

Such an engagement may possess risks but may also provide an impetus to help discover a different dimension of the creative Spirit of God for the new millennium. Otherwise the alternative currently developing for the traditional Christian churches in the United Kingdom is to sadly acknowledge that they may inevitably become ‘history’. 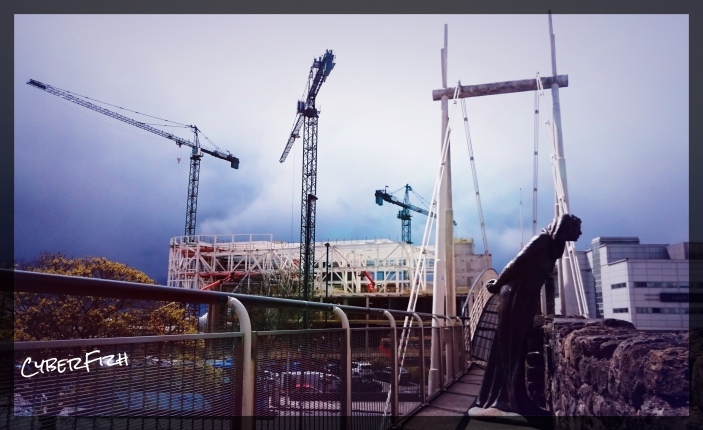 What will the Church of the future look like? In the face of continuous change this question is becoming evermore prominent to those churches that do not wish to have their backs to the future. In an insightful article by Carey Nieuwhof in ‘ChristianWeek’, Carey writes of a ‘seismic shift’ taking place today that is parallel to the conversion of the pagan Roman Emperor Constantine to Christianity in the fourth century, or the invention of the printing press in the fifteenth century.

The latter had a direct influence on the Reformation of the Christian Church in Europe which it is commonly agreed, began on 31st October 1517 when the German monk and theologian, Martin Luther, nailed his 95 theses to the door of All Saints Church in Wittenberg. The theses were a response to the then practice of selling ‘indulgences’ to absolve sins. Luther propounded two central beliefs in his theses: that the Bible is central to Christian religious authority and that human beings may reach salvation by their faith alone and not by their deeds. It is arguable that Luther would easily have disappeared into history and the Reformation never have begun without the invention of printing to quickly disseminate his ideas.

Although the original Reformation is now consigned to history the Christian Church could be on the cusp of a ‘digital’ Reformation 2.0. This is not due to any malpractices within the Church but simply because of the revolutionary development of information technology since the arrival of the internet.  Carey does not himself make this claim but some of what he says in his article ’10 predictions about the future Church and shifting attendance patterns’ does imply this.  For example Carey’s second prediction says this:

“…many individual congregations and some entire denominations won’t make it. The difference will be between those who cling to the mission and those who cling to the model. When the car was invented, it quickly took over from the horse and buggy. Horse and buggy manufacturers were relegated to boutique status and many went under, but human transportation actually exploded. Suddenly average people could travel at a level they never could before. The mission is travel. The model is a buggy, or car, or motorcycle, or jet. Look at the changes in the publishing, music and even photography industry in the last few years. See a trend? The mission is reading. It’s music. It’s photography. The model always shifts….moving from things like 8 tracks, cassettes and CDs to MP3s and now streaming audio and video. Companies that show innovation around the mission (Apple, Samsung) will always beat companies that remain devoted to the method (Kodak). Churches need to stay focused on the mission (leading people into a growing relationship with Jesus) and be exceptionally innovative in our model.”

Anyone who is familiar with the Acts of the Apostles in the Bible will know how much the model of the apostles’ faith had to change in order to engage with the missionary journey they were led to undertake through God’s Holy Spirit. If they never had changed the model, the journey would never have begun and Christianity would probably have disappeared as a sect of Judaism within the first few centuries, if not decades, of the death of Jesus.

Today, as the internet matures and becomes part of our ‘normal’ experience it is becoming increasingly evident that a seismic shift is happening within our human cultures, particularly in relation to communication.