Cyberfizh is my way of asking a simple question. For a while it was the wrong question. That question was:

‘What is digital technology becoming?’

But the question I am asking now is:

‘What is digital technology helping us to become?’

Cyberfizh explores faith in the net of life: innerspace, outerspace, and cyberspace, from a predominantly Christian perspective, and represents nothing more or less than my views and the conversations I pose within our expanding digital universe.

I am a vicar in the Church of England. I am married to a wonderful wife and have three grown up children, all of whom who are my best (and worst!) critics. I have a passion for the digital realm that began when I was a child and programmed my older brother’s Atari home computer. I am interested in exploring how these technologies continue to shape us.

In 1964 Marshall McLuhan coined the phrase,”The medium is the message”, meaning that the form of communication (books, films, etc), embeds itself in the message, creating a relationship by which the medium influences how the message is shaped.

In just twenty years the internet has evolved to encourage each of us as users to be interactive participants, contributing to the message as it is communicated. Despite initial predictions digital media is not replacing printed books, but it is shaping our learning experiences, social and commercial interactions, and world views. British musician, broadcaster, and religious commentator, Vicky Beeching, explores some of the implications for the Christian Church in the video clip below.

We live in the age of the ‘meme’, a phrase first coined in 1976 by the evolutionary biologist and self-professed atheist, Richard Dawkins, to describe small pieces of culture that spread from person to person by imitation but with the possibility heightened in the digital age for more rapid distribution and adaptation. The digital meme defines our post-modern condition filled with irony, creativity, interaction, subversion, and anxiety. 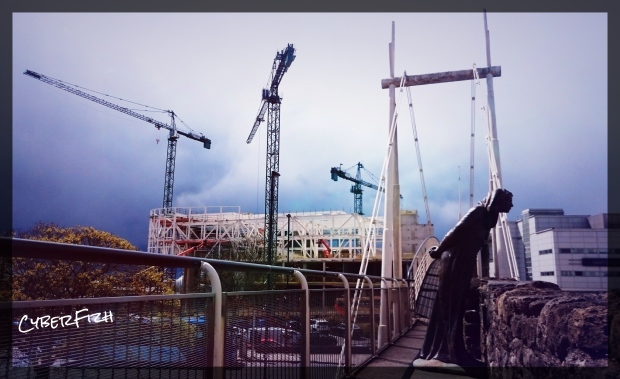 The Christian gospels are not memes, but they were written in Koine Greek, ‘ἡ κοινὴ διάλεκτος’, or “the common dialect” of the Roman Empire. In the twenty first century social media is increasingly becoming our everyday language. This development raises some of the deeper, and lighter questions, I explore in Cyberfizh, such as:

To start this journey my answer to the last question is this emoji:

Followed by, ‘Now go and work it out.’