There is a Cherokee story of a grandfather teaching his grandson about life.

“A fight is going on inside me,” said the grandfather to the boy.

“It is a terrible fight and it is between two wolves. One is evil – he is anger, envy, sorrow, regret, greed, arrogance, self-pity, guilt, resentment, inferiority, lies, false pride, superiority, and ego. The other is good – he is joy, peace, love, hope, serenity, humility, kindness, benevolence, empathy, generosity, truth, compassion, and faith.”

The grandfather then added, “The same fight is going on inside you – and inside every other person, too.”

The grandson thought about this and then asked his grandfather,

“Which wolf will win?”

Perhaps the most concise film introduction to a fictional political thriller that I have seen is ‘The Kingdom’ directed by Peter Berg and released in 2007. The film explores the complex relationship of the United States and Saudi Arabia through the 20th century and post 9/11. Although the film had mixed reviews I think the introductory titles are worth watching. But even before the discovery of oil Western culture has always had a fascination with the Middle East.

Earlier in the 20th century the controversial figure ‘Lawrence of Arabia’ captured the popular imagination in the West via his exploits in the Arabian desert, dramatised through newspapers, books, and films. Michael Asher, a former SAS soldier, once retraced Lawrence’s epic journeys in his book ‘Lawrence: The Uncrowned King of Arabia’. At one point Asher writes in appreciation but also critically of Lawrence:

“Although Lawrence genuinely tried to see things from an Arab point of view, and did so more successfully than most, his technique of ’empathy’ remained a method of control. He believed the traditional Arabs morally superior to Europeans because they were ‘primitive’ and therefore ‘innocent,’ but not intellectually so. The reality of his privileged position was stated frankly when he wrote: ‘Really this country, for the foreigner, is too glorious for words: one is really the baron in the feudal system.'”

Trying to comprehend the turbulent relationship that the West has had with the Middle East may help us to understand how this influences the relationship of Christianity with Islam. Thoughts may quickly race to the period in history known as the Crusades. This will often be a starting point for many people, but it does not have to be the end. For example, amid the strife of the Fifth Crusade a little-known true story of hope can be found.

If you were asked to think of Saint Francis of Assisi you would probably picture a medieval saint, dressed as a monk in a brown habit, and surrounded by animals. Unfortunately this caricature does not reveal the depth of character of this revolutionary Christian who had a profound interfaith encounter with a Muslim during the time of the Fifth Crusade:

“In 1219 an encounter took place between a Christian from Italy, Francis of Assisi, and the Islamic Sultan of Egypt, al-Malik-al-Kamil. This meeting took place at Damietta in northern Egypt during the progress of the Fifth Crusade. Over a period of perhaps three weeks, religious dialogue took place between Francis and Al-Kamil, after which time the Sultan had Francis escorted safely back to the Christian camp. It is possible to discern from the writings of Francis after his return from Egypt that the meeting had a deep religious impact upon him in the latter years of his life. It can be said that both Francis and al-Kamil experienced through their encounter what the Christian theologian Bernard Lonergan has spoken of as a conversion into a new horizon. The historical encounter between Francis and the Sultan witnesses to the fact that through religious conversion, it is possible for members of different religious faiths to arrive at a common vision of universal peace and reconciliation.” 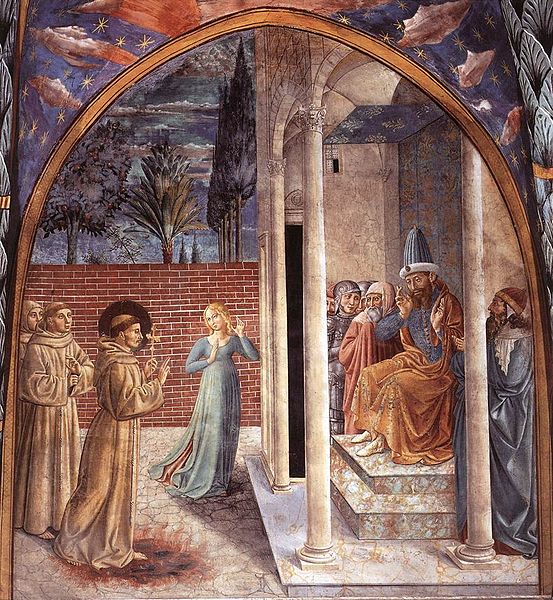 Which is the wolf we are feeding?

The story of St. Francis and the Sultan is a salutary reminder not to demonise whole peoples due to the terrible acts of individuals or groups driven to violence. Even before the recent and tragic events in France and Germany in the past week or so, social media has empowered us to provide immediate responses in the public domain to such acts, including those denouncing religion as a ‘primary motivation for violence’ from which we need to be freed.

Although this is an understandable reaction the truth is that motivations often tend to be far more complex and involve a number of factors. This is something I have briefly tried to illustrate in the examples provided in the relationship between the West and the Middle East. And although the British scientist and atheist, Richard Dawkins, has publicly denounced religion, there is evidence that suggests that only 7% of all wars in history have truly been caused by religion.

Totalitarian regimes such as the Soviet Union under Josef Stalin in the 20th century have been far more lethal in the eradication of human life for the sake of political ideology. It is generally agreed that Stalin was responsible for the deaths of 20 million people. It seems we will always find a reason to kill one another, with or without God.

I accept it is easy for me in the comfort of my home and cocooned within the security of a western-liberal democracy to make these statements. I also appreciate that political and religious extremism of whatever kind not only exists but demands our attention in the 21st century. But extremism is simply that – most people in the world want to live an ordinary life. That is important to remember and to communicate to one another too.

I believe we are all ‘fearfully and wonderfully made’ (Psalm 139:14). Whether that is your belief or not we still have a mutual responsibility to engage with that which appears to be in juxtaposition to all that we are. Whatever our creed, ethnicity, or culture, we have the ability to communicate and potentially co-operate with one another like never before.

Which is the wolf we are feeding?

our children will live with the answer…

Personally I do not believe in fate but in free will.

Choice lies in our hands…